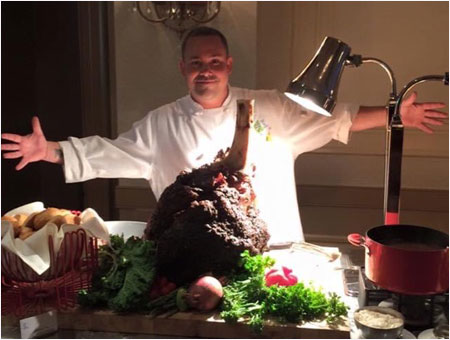 Executive Chef Casey Ryan has been leading the culinary team at the RP Funding Center since October of 2019. Since stepping into the role, Chef Casey has revamped the facility’s catering and wedding menus in which he incorporated the most modern culinary techniques and concepts. He strives to ensure that the RP Funding Center’s culinary program offers guests the highest quality food and beverage experience that is infused with the latest trends. Chef Casey continually works with his food vendors to source local items such as wine, beer, cheese, meats and produce to use in the operation while training his team on new cooking techniques and methods, menu development, and guest and client satisfaction.

A graduate of the Culinary Institute of America with a PCII certification, Chef Casey has more than 20 years of culinary experience in the sports, entertainment and hospitality industry. His career path has allowed him to provide culinary services for a variety of high profile events and guests including the World Series, the Republican National Convention, the Outback Bowl, the Super Bowl and galas for Sarah Palin, John McCain, Hilary Clinton, the United States special Operations Command and LandWarNet.

Chef Casey began his career in 1998 working in country clubs and restaurants where he had the opportunity to be at the forefront of the field’s most modern trends and techniques. In 2007 he moved onto a Suites Chef position with Tropicana Field and soon after was promoted to Sous Chef at the Tampa Convention Center in 2008. In his four years at the Tampa Convention Center, he was honored as both Manager and Culinarian of the Year. From 2012- 2018 Chef Casey worked in Executive Sous Chef and Executive Chef positions for the Atlanta Braves where he was responsible for oversight of press dining, suites, catering, the 755 club and large scale events for some of the most prominent fortune 500 companies such as Microsoft and Delta with attendance ranging from 12,000 to 15,000 people. He also implemented and spearheaded the new company mandated waste management program and introduced the Big Night Out (BNO) concept where he invited in local and celebrity chefs to do cooking demos in order to showcase local ingredients to the fanbase and support the local economy. While in Atlanta, he also launched the culinary operations for the openings of Sun Trust Park and the Coca Cola Roxy Theater which included complete kitchen design and build, menu and concept development, and team development. One of his major successes at Sun Trust Park included the creation of the Farm to Fam concept which utilized local, seasonal items in the suites and provided local vendors with concession stands to promote their farm and harvest. The concept also expanded to being included on the Park’s catering menu and as an additional menu selection throughout the stadium’s portable stands. In this role, Chef Casey was named Company Chef of the Year three years in a row, Manager of the Year on three different occasions and was awarded with the Concept of the Year award two years in a row for Farm to Fan.

Throughout his busy schedule and career, Chef Casey still makes time to give back to those in need. He is currently involved in the Habitat for Humanity, Battered Women of America and the American Red Cross charities and has also supported Rising Chefs of America, Chefs of the World and prepared and delivered thousands of Thanksgiving and Christmas meals for the less fortunate.

Chef Casey considers the kitchen design of Sun Trust Park, the culinary execution for the SpaceX Tesla Launch event, and development of every Sous Chef he has trained who has advanced to the role of Executive Chef as the highlights of his career.